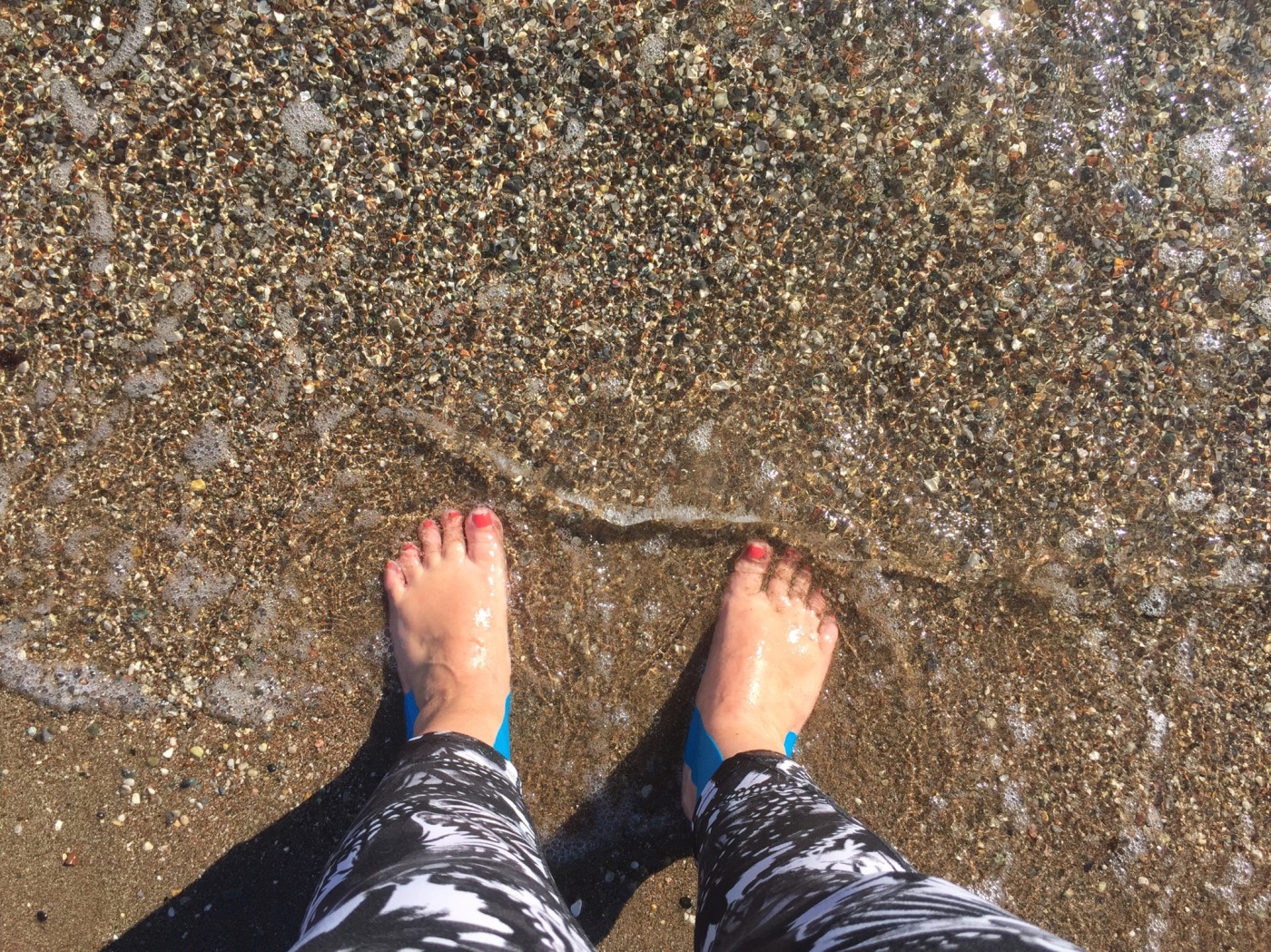 This year I set myself some pretty lofty running goals. Although it’s not the actual goals themselves that are lofty, more the timing. My bad, as ever.

Obviously after the whole ‘almost marathon’ thing, one of these goals is to actually complete the whole 42km’s. I’ve entered the ballot for the London marathon, but I think I will be more excited to not get in as my wee Scottish BFF, Karen, has PROMISED to run the Roads to Rhodes marathon with me! But even before that event I had resolved to fix my running technique so as too run injury free and curb my dependency on kinesio tape. So I am taking on barefoot running. And the other one is run the Athens marathon in 2017. If you know me and hills, you will understand why this is such a big deal.

One of the few disadvantages of living on a Greek island is that I can’t pop along to my local running club (there isn’t one) and find a coach to guide me through the transition from running in gel numbus to nothing at all. So I’m winging it. I’ve read stuff on line and I’m working my way through ‘Born to run’ and ‘Running with the kenyans’. I do have a very sympathetic physiotherapist who is also a runner and a barefoot one at that.

The theory behind the barefoot thing is this. When running unencumbered by great big, clod hopping, eye wateringly expensive trainers, the front of your foot hits the ground first. Because your body is biomechanically designed to run this way, there is less strain on all of your kinetic chain, but especially shins and knees – the place where runners are most likely to experience injuries. When you run in aforementioned trainers, most people are likely to land on the heel of the foot, an impact which jars your legs. The heel strike, as it is called, also means that your foot is landing ahead of your body when the preferred position is under your centre of gravity, again to lessen the impact on your joints. If you try and land on the front of your foot with a long stride its pretty damn impossible. Trust me, I tried it. Also the action of running ‘on your toes’ builds up strength in your feet and your calves. Important places to be strong when you are running.

It seems to be a bit divided as to whether you have to fully embrace the barefoot thing to the exclusion of ever wearing evil trainers again, or whether you can combine both. I have taken the opinion that even if I do only one barefoot training run a week I will be helping my running technique and strengthening crucial muscles.

At the moment I wear Asics Gel Nimbus with a custom inner sole and I did all my marathon training in these. Admittedly I already had the beginnings of problems with my lower legs before I took on these shoes, but I went on to develop shin splints. I’m not saying the shoes are to blame, but I am saying they didn’t help.   I’m going to put the original soles back in for now and try to move on to flatter, less chunky trainers. If all goes well with the barefoot thing I suppose I will end up with a pair of vibram five fingers. But they are just so damned ugly!!

I may joke about all this, but I really am taking it seriously. And it’s a big commitment. By going down the barefoot route I will have to re-educate my body to run in this style. It might be the body’s natural way to run, but I have just spent the last 2 years training my body to run a different way. So it’s really like starting all over again. Short runs at first and VERY slowly building up to more time on my naked feet. I honestly haven’t figured it all out yet, but I believe it’s worth a try.

Today was my first bash at it. I warmed up with a 10 minute run around the road, with my trainers on. Then I kicked them off and squelched my toes in the sand for just under 2 kilometers – about 8.30 minutes a kilometer. It’s hard running on the sand, but oh the joy! And the excitement when the sea washed over my feet a couple of times was ridiculous. I can tell you, it’s true what they say. Running barefoot really does make you run ‘on your toes’! I also felt really light and concentrated on short, staccato strides. Towards the end of the 2nd kilometer my feet started to land heavier and more flat footed. As they did, I felt my legs jar at each footfall. I recognized that this was a result of my legs tiring and my form subsequently deteriorating – already! But ok, it’s the first day and I knew it wouldn’t be easy. An added bonus was being able to stand my legs in the sea afterwards, but I cursed myself for not bring a swimming costume.

And about that timing thing? I’ve sort of signed up for a half marathon in October. Actually, there is no ‘sort of’ about it. I have. So I’ve got 4 months to get on top of 21km’s in minimal footwear and new running technique.

One thought on “Barefoot”